AFGHANISTAN: BEYOND THE HEADLINES

I’m curious . . . what words do you associate with Afghanistan?

Chances are, they are not the most positive. Let me guess: war, bombs, insecurity, somewhere to stay well away from. Am I close?

As I sat in the airport terminal one summer afternoon, minutes before boarding a flight from Dubai to Kabul, those words were also on my mind. Somewhat distractedly scrolling through anxious WhatsApp messages from family and friends, I thought back to everything I had seen, read, and researched about Afghanistan. We hear a lot about this country, very little of which is hopeful.

Yet what I experienced over the following weeks was very different from what I had anticipated. Within days, I began to associate Afghanistan with new words. Some of them may surprise you: beauty, kindness, laughter, hospitality. Steadfastness. Strength.

Now, don’t get me wrong. What you read about Afghanistan is a reality. On my last day, as I was packing to leave, Kabul was in the midst of a deadly attack which killed several people and injured dozens more. Pictures were emerging on Twitter of traumatized, wounded children being rushed to hospital, still desperately clinging to their school books. This is a daily reality for too many Afghans. Decades of war have taken their toll, there’s no denying it.

Yet, within hours, minutes even, of an attack, people resume their daily lives. Children get back on their bikes and play in their neighborhoods. The familiar chime of ice cream carts in the streets is heard again. Cars pack the road once more, as people scramble to reach their office or the market.

For Afghans, these simple acts are not ones of bravery, of superhuman resilience. They are merely what it takes to get from one day to the next. Beyond the headlines, life goes on. Because it must. Yet, for the outsider looking in, you can’t help but be struck by this unwavering capacity to carry on, come what may.

One of the privileges of my job is being able to enter people’s lives amidst what can appear to be overwhelming challenges. I get to travel to their villages, and sit in their houses over a cup of “chai” and a plate of mulberries. I get to hear from them directly. I see first-hand what they are made of.

A man sits with a cup of tea during a meeting with Medair’s team. © Medair

On my visits, I interacted with a number of people in some of the most remote communities in the country, often travelling for several hours on very narrow mountain roads to reach a single community (“Don’t look down. Whatever you do, just don’t look down!” I would tell myself every time we approached a particularly treacherous bend).

Medair, along with other aid organisations working in the country, has been trying to ensure those words become a distant memory. Yet, a very long road still lies ahead.

As I sat with a large group of village leaders one morning, a teenage boy quietly observing the scene in the shadows spoke up, “We are suffering because we are poor. I’m 16; I want to go to school, but I can’t. I can only go from time to time, because I need to work. Without the money I earn, we can’t live. There’s no other choice.”

Another young man, age 22, added, “We’re so thankful for what you have done in this community. But please, there is much more to do elsewhere.” As he said this, he reached into his pocket, pulled out a piece of paper and proceeded to list the very real issues plaguing his village: no drinking water, harsh winters, droughts in the summer, malnutrition—to name a few. Another man shared the story of a woman from his village who died giving birth because she could not reach a health facility in time—the closest one being a three-hour walk away. 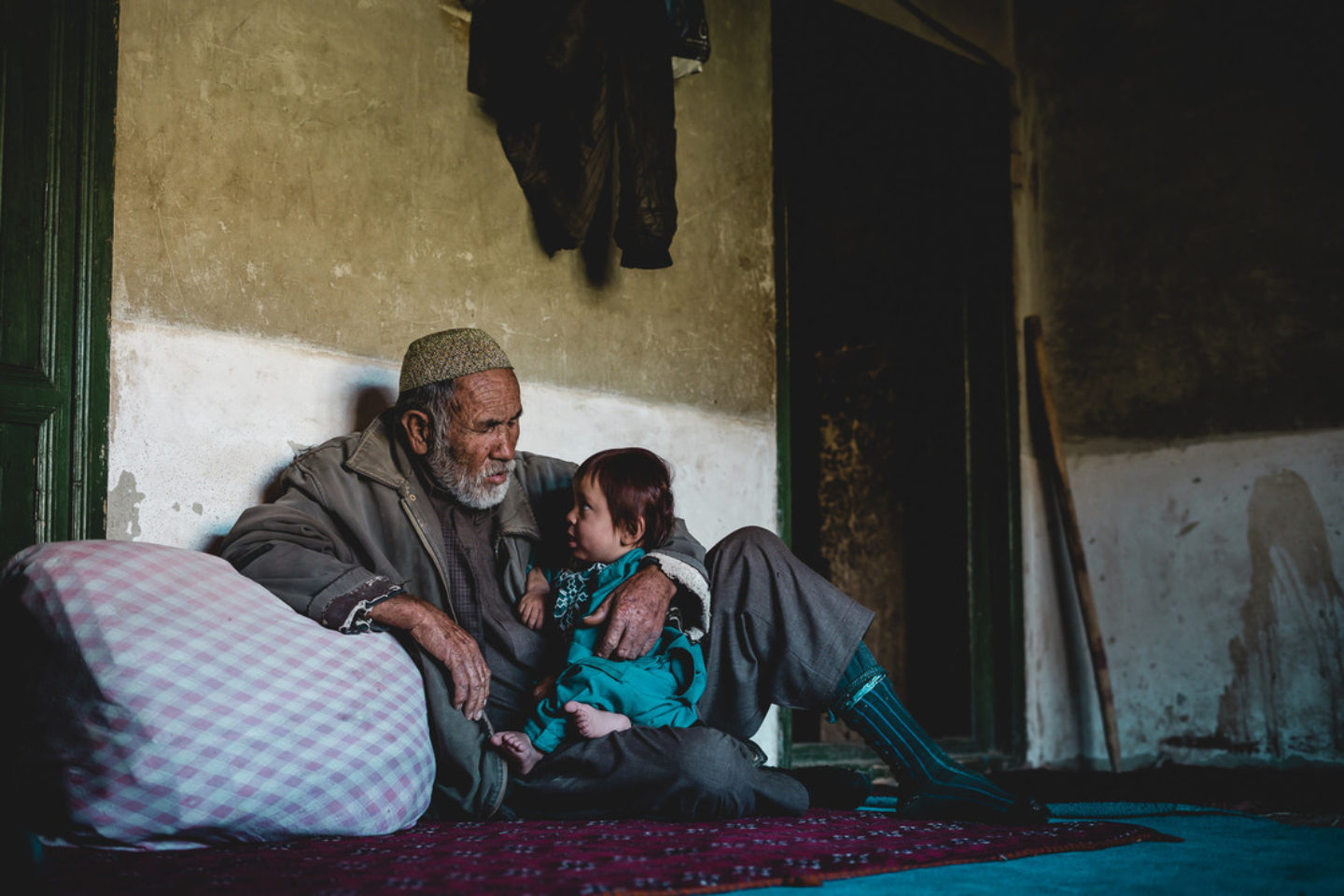 An elderly man sits in his home with his grandson on his lap. © Medair

The effects of war are far-reaching. They are not just on a battlefield. They are seen in the immense difficulties in developing essential infrastructure and life-saving services, especially in Afghanistan’s many isolated areas. Frankly, there is currently little cause for optimism. Funding for humanitarian assistance in Afghanistan remains a significant challenge and this has real-life consequences. It is truly heartbreaking when aid groups have to leave a community still very much in need due to lack of funding.

Even where we help, it can sometimes feel like a drop in the bucket. Seeing communities access safe drinking water for the very first time as a result of our work is immensely rewarding. Hearing a mother tell us her children are now healthy thanks to the nutrition treatment our teams provided, makes the long hours spent to reach her village all worth it. But it can quickly be overshadowed when you remember that somewhere else, another community still has nothing.

So much more remains to be done. Yet, despite the immensity of the challenge, now is not the time to give up.

So, could I gently urge you: Don’t forget Afghanistan. Don’t dismiss it, as can so easily be done, as a hopeless case. Beyond the headline you read and the grim reports on 24/7 news channels, are families—men, women, children—with the same aspirations, hopes, and dreams as you. Yes, it can sound like a tired, overused cliché to say this, but that doesn’t make it any less true.

A young boy sits in front of a community facility during a visit by a Medair mobile nutrition team to his village. © Medair

Afghans deserve our consideration and respect. They deserve to be seen not as casualties of war, but as the strong and quietly determined people they are. They too deserve a chance to tell their children that anything is possible. And they deserve to see the day when the words we associate with Afghanistan will no longer be ones of despair and hopelessness, but ones of peace and opportunity.

Medair is an international humanitarian NGO that provides emergency relief and recovery services to families made vulnerable by natural disasters, conflicts, and other crises. Medair is currently active in 10 countries.

This content was produced with resources gathered by Medair field and Global Support Office staff. The views expressed herein are those solely of Medair and should not be taken, in any way, to reflect the official opinion of any other organization.