It’s only 7:00 in the morning, but the sun is already high and the small village of Dhobi is already immersed in its daily activities. The family we will visit this morning does not live far from the village, a few kilometers further up the road that climbs the mountains. The rain has not yet come this week and the dirt road is in good condition.

We park on the roadside and walk down a small dirt path. Behind the curve, two houses built a few meters from each other appear. One is new, colorful. The other visibly damaged. Outside, a young girl about nine years old sits outside on the porch, while her mother hangs clothes on the clothesline to dry.

As soon as they notice us, they abandon their activities to welcome us. For Nepalese, hospitality is sacred. The woman enters the house and comes out with four wooden stools and motions for us to sit down. Meanwhile, the young girl comes out with four steaming cups of tea. With the help of our interpreter, a conversation begins timidly but grows with intensity and meaning as the minutes pass. 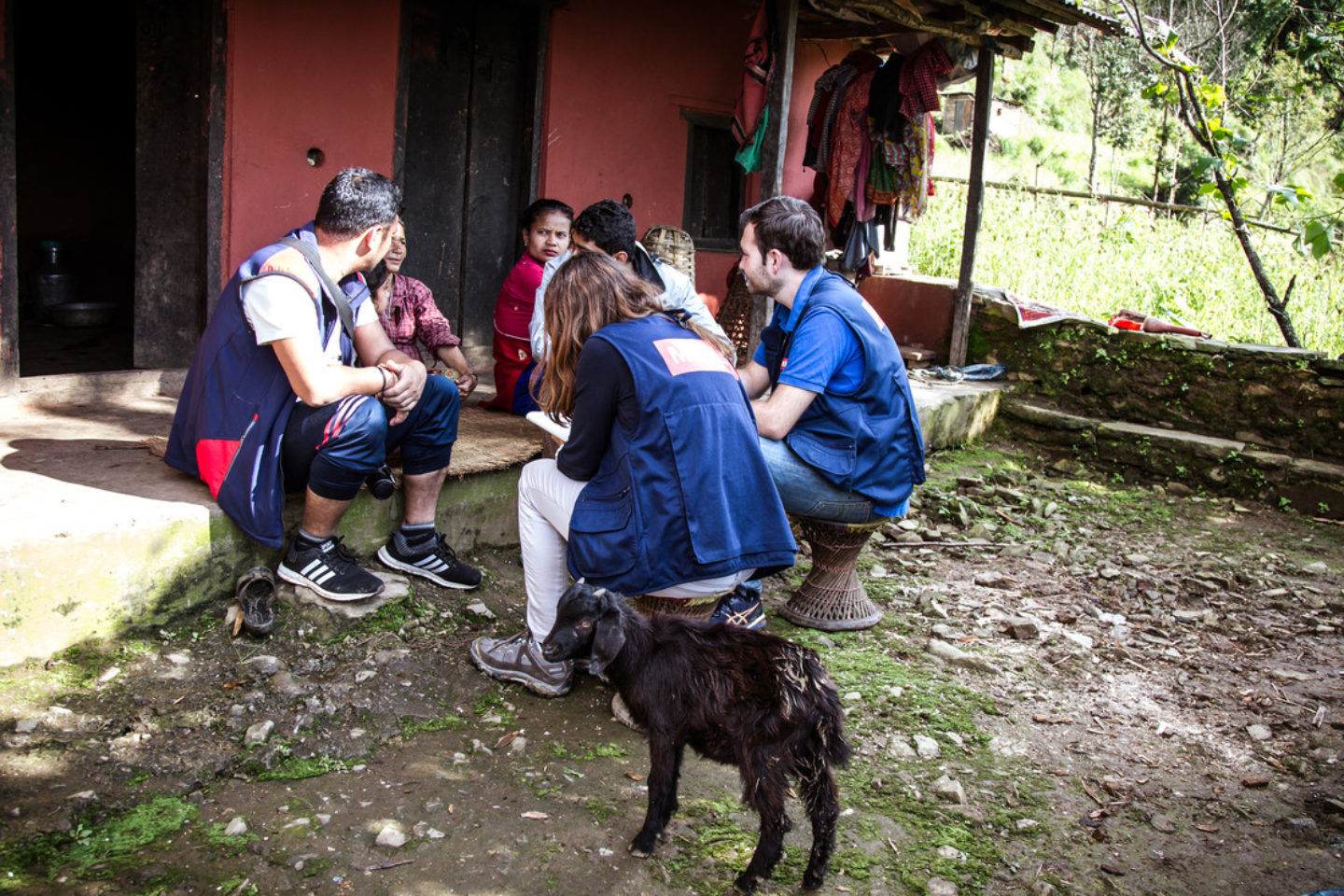 The mother, Lok Kumari, is a strong woman. Life has put her to the test over and over again. “I lost my husband seven years ago. A year later I also lost my child, who had suffered from a serious birth defect,” she tells us. Since then Lok has lived alone with her six daughters.

“Being a mother of six daughters is extremely difficult here,” she tells me, smiling tenderly at Rasmita, her nine year old daughter, while gently ruffling her hair. Lok explains that in Nepal when a girl gets married her family has to pay a dowry to the husband’s family. But the dowry is not the only problem her family has faced over the last few years. Their home was severely damaged by the violent earthquake on April 25, 2015. The house is still standing, but marked by visible cracks inside and out.

“For more than two years we lived in the stable we now use for animals,” Lok tells me, showing me a small shelter without walls, covered only by a few braided branches. I can’t imagine what is must have been like living in those conditions.

But Lok did not give up. With the help of Medair and its local partner organization (CDS) Lok obtained funding made available by the government for reconstruction. But even after getting the funds the road to reconstruction was complicated.

“We needed help to transport the material from the road to here. And we had to make sure the reconstruction work proceeded according to the criteria established by the government,” says Lok.

After the 2015 earthquakes struck, the Nepalese government made funds (equivalent to $3,000 per family) available to build a new home, on the condition it be built following the government’s guidelines for earthquake-resilient construction. Medair and CDS’ engineers accompanied Lok during the entire reconstruction process.

“Medair followed the work of the masons to make sure  the house was built according to the rules. And they helped me with the administrative process of the government, which for me, who can’t read or write, represented an enormous obstacle.” 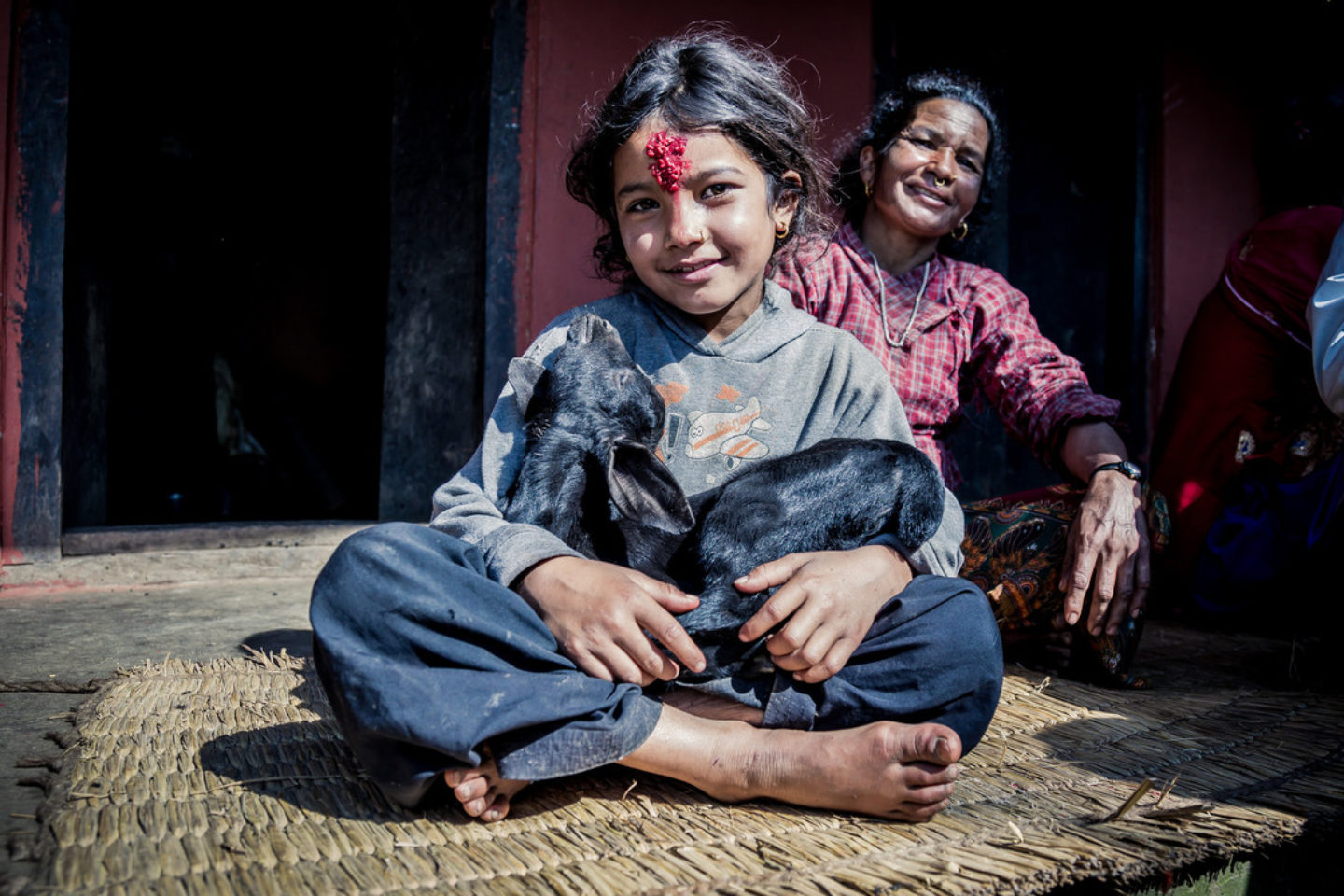 When I ask Rasmita if she is happy with her new home, she answers with a big smile, “Of course, because it’s rambro,” a word meaning something beautiful, colourful, and “right” in Nepalese.

“Sometimes I still use my old house to cook,” Lok tells me. “But Rasmita scolds me, ‘Don’t stay in the old house, it is dangerous. It’s not safe.’”

Almost two hours have passed since we arrived. We have another appointment in Dhobi, and I reluctantly take my leave from the family. In the following days, Lok and her daughters’ story stays with me, weighing on my heart. When I decide to visit them again, I have some apprehension wondering whether they be willing to give me more time. But these thoughts disappear as soon as the small path leading to the house appears.

Rasmita welcomes us with a huge smile, joins her hands in the typical “Namaste” greeting, and shouts happily to her mother, “Mother, they are back! Prepare tea!”

And there, with another cup of tea, our conversation starts again, “My greatest wish is to raise my daughters as good human beings. I would very much like them to do what you do, visit and help the weakest. But in the end, what I want most is to give them the freedom to choose what they want to do in life,” Lok tells me. “I wish they were autonomous. I am happy they can attend school. I have not had this luck and I hate myself when I have to sign the government documents with a fingerprint because I have never learned to write. I don’t want this to happen to my daughters. Like all mothers in the world I am happy if they are happy.”

At 9:00, two daughters return carrying on their shoulders two jars full of grass for the animals. I stand aside and observe this scene of everyday life: the three little girls wash themselves with a bucket of water, enter the kitchen and eat their breakfast, between one bite and the next they slip into their school uniforms. A morning like any other filled with gestures of childhood sweetness, which have the power to remind me of my childhood and family, connecting me even more to this family who lives at an altitude of 4,000 meters (13,123 feet) in the mountains of Nepal.

The girls are ready to go to school. They give their mother a kiss and are on their way. When I tell Lok how much I admire her and ask her how she has managed to overcome all the adversities she has faced in life, she replies serenely, “I believe in God. I believe in his strength and goodness that allowed me to overcome so many obstacles. I am committed to the present and trust in the future. Everything will be fine.”

I bid Lok farewell, knowing I probably won’t have the opportunity to see her again. However, her words and her presence will remain with me forever.